Relief Not Shared In Squat Toilets

Posted on September 2, 2012 by wendyannkay 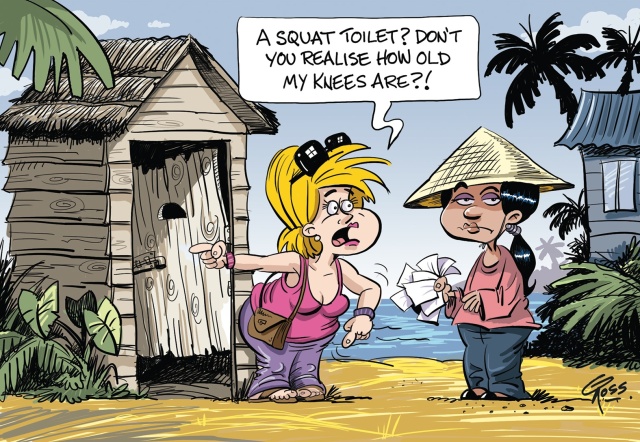 Ok, so maybe there were a few things about the marvelous spirit of adventure I was recapturing last week that I’d forgotten. Squat toilets would be one of them.

Although I remembered well the offensives on the nostrils and the eyes, my knees appeared to have forgotten the flexibility required to use them.

I was in the Vietnamese coastal resort town of Nha Trang about to go out to sea on a converted fishing boat which I suspected had little restroom comfort on offer. So, I jostled my way through the masses to the WC, a squat protected by a rickety wooden door. Not the flashest of loos I’ve come across, and it was certainly under a lot of pressure catering to a weekend crowd, but what the hell, I’d hunched down over worse.

I plunged in, swinging the door behind me, only to have it swung wide open again by a furiously squawking toilet attendant demanding money. Another thing I’d forgotten, a pee needs payment and it didn’t take much imagination to understand the tirade aimed at me when she thrust a sheet of toilet paper in my hand and snatched my money with the other.

I swung the door closed again, catching a glimpse of the crowd outside, this was going to have to be quick.  No problem, once a backpacker always a backpacker, I was a pro at peeing into a hole. Get down low, low enough to aim sure and straight, maintain position and fire, avoiding your shoes and the cuffs of your pants. Easy peasy. I didn’t think twice about it, until I started to bend.

What the …? Had they dug these holes deeper into the ground? Was I taller? Because instead of my bum hovering just centimeters  above the hole, it was suspended in animation only half way down. My obstinate knees were refusing to assist its journey any further south.

Reality hit me as ferociously as the rant from the toilet attendant. My knees were 30 years older and there was no way they were going to squat on demand, toilet emergency or not. They clearly had their limitations and weren’t going to cooperate.

I was in trouble. Peeing from a height of 30 centimeters wasn’t an attractive option, nor was sticking one’s hand out to offer balance on the ground, as anyone who’s used a squat can imagine. To add to my dilemma my rabid toilet attendant started screeching at me again through the door. The queue was building, time was money, and this dodgy westerner was taking too much of it.

But I was physically stuck. In a jam with no apparent solution. That is until toilet attendant woman started banging on the door with increasing fury. With visions of her bursting in Rambo style and exposing me with my pants half mast in a pathetic semi squat to the gathering crowd sheer fear triggered a surge of adrenalin  and ignoring the protests from my knees I fell into position. Yelling out ok I answered the call of nature.

Oh, one more thing I’d forgotten, never wear flowing pants on a squat. But, if you do, walk tall, and ignore the smirk of the woman who’s staring at your cuffs.

This entry was posted in LET'S DISCUSS and tagged toilet attendant, travel. Bookmark the permalink.