As I watched the teen pick up her pushbike to carry it across the railway tracks I had a split second of the most horrific “what if”.
What if the train came right now? What would I do?
I wasn’t comforted by the site of half a dozen Indians dotted around the tracks picking through the garbage to fill their sacks with trash and on-sell for recycling. That was their normality. Watching my daughter carry her bicycle across a working railway track certainly wasn’t mine. But this was India, and things were done differently.
So, I did what I always do when my daughter and I were pushed brutally out of our comfort zones, I made her laugh.
“Don’t do this at home darling!”
I scrambled down the rubble-strewn slope after her, picked up my own bike and followed her across the railway tracks, my head swivelling from left-to-right, as I urged her to “move it”!

We were in Nizamuddin, a Delhi neighbourhood bordered by a lively market dominated by Muslim vendors and an upper-class residential area. We had joined a group of tourists from America, England, New Zealand, Australia and Holland on a tour called Delhi By Cycle. We had already cycled down the railway platform, where I instinctively warned the teen to keep behind the yellow line, a warning which died on my lips as I saw our group leader continue off the platform, down the slope and proceed to cross the tracks. Just like thousands of Indians do every day. Every year 15,000 of those people die.

Our driver Prakash had picked us up at 6am to meet up with the group at the police station. It was pitch black and the teen wasn’t happy. I imagined there would have been a thousand places she would have preferred to be than standing on the side of a busy Delhi Rd outside a police station surrounded by shadowy figures wrapped in blankets, or indeed lying at her feet.

Once the last member of our tour joined us the rules were explained, such as they were. Our guide Shashi said we were to follow him, when he put his hand out to go left or right we followed. We were to toot our bells (pathetic little tinkles against the might of the Delhi driver’s horn) and we were not allowed to talk on our mobiles while we pedalled. Of course we weren’t.

Off we went. And when I say off, I mean off. Right into the traffic. I hadn’t banked cycling across four-lane highways in the paths of trucks, buses and hundreds of those wretched tuk tuks. Traffic in Delhi at 6.30am is a little like traffic on Sydney’s Pacific Highway at 8am on a weekday. You don’t want to be in it! 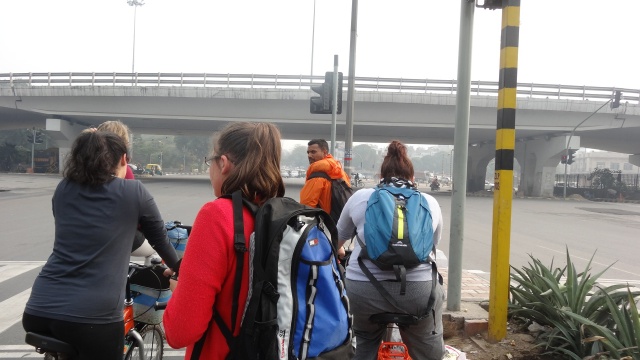 I followed behind the teen after telling her to ignore every safety rule she had ever been taught and to just keep going, stopping for nothing or no one. I watched her keeping close to Shashi but turning around often to make sure I was right behind. And I was. The others in the group knew not to overtake and come between us, they understood our need to be tight.

Cycling through the narrow alleyways of the slums was another challenge. The teen couldnt get through quickly enough but it was torture for me to ride past when there was so much to take in. So much to absorb. I could only snatch glimpses of the lives I was pedalling past, feeling conflicted with every thrust of the pedal. Was I some faceless voyeur to these families? Was this something I needed to see to feel?

We cycled through rows of washing, wet jeans and shirts slapping our faces, we passed people eating, children discoloured from dirt laughing and playing ball, men ironing clothes with huge rustic irons heated from coal. We pedalled over potholes, puddles and poo. Lots of poo from who knew what. We dodged dozens of dogs lying across our paths and refusing to move, goats tethered to doors and a cow so at ease with its sacred status I’m sure it laughed when I nearly came off trying to avoid it.

After 15kms our bums were sore and our legs were like jelly. But we felt good. We had learned so much more about each other and how far we could be pushed. I learned to step back and trust her, while she learned that sometimes rules were meant to be broken and common sense had to relied upon in huge doses. The teen showed lots of it that day, managing in the process to eliminate a couple of those rotten “what ifs” from that enormous list which embedded itself in my brian from the moment she was born. I know now that if a train had come hurtling down the track she would have moved a hell of a lot faster than her mother. 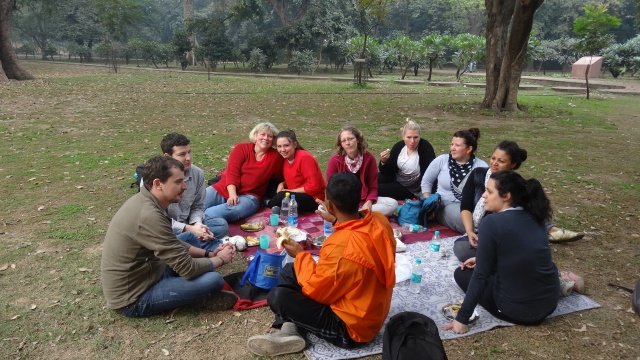 This entry was posted in menopause and madam. Bookmark the permalink.