Mumbai, menopause and madam – The train

Posted on January 4, 2013 by wendyannkay

The teen and I were catching our first train in India.
We were travelling from Ranthambhore to Delhi to meet up with an old friend, Tanya Willmer, where we would spend just one night before flying to Goa.
Although our train tickets had been booked, that didn’t necessarily mean things would go smoothly. We had heard all the nightmare stories – people claiming your seat, theft, trains not turning up, break downs, fires, or just plain running late.

One Aussie traveller we met travelling with his wife and three daughters, took a sleeper train and woke one night to find an Indian sitting on the end of his bunk.

“He was just sitting there as if it was a perfectly normal thing to do,” he said. “So we had a conversation for the next three hours, which was interesting considering he didn’t speak English and I didn’t speak Hindi.” Throughout the 17-hour-journey he was also handed a Glock pistol to admire, was admired himself by one gentleman who constantly told him he loved him, and he watched in astonishment another man snap a photograph of his daughters before jumping from the moving train as it pulled out from a station.

So what was India without a trip on a train! I figured it was all part of the experience and we had to do it, if only once, and a short trip at that.

Daylight was just breaking on this very cold and foggy morning at Sawai Madhopur station. We were met by a cow blocking the narrow entrance (the teen wouldn’t let me stop and take a photo) and there were lots of shadowy figures…

…which was why the teen was understandably a little nervous.

Some passengers were making sure they didn’t miss the train…

…while others waited patiently in the waiting room. This lovely lady couldn’t take her eyes from us, politely staring, while her baby looked just a little alarmed by the teen. 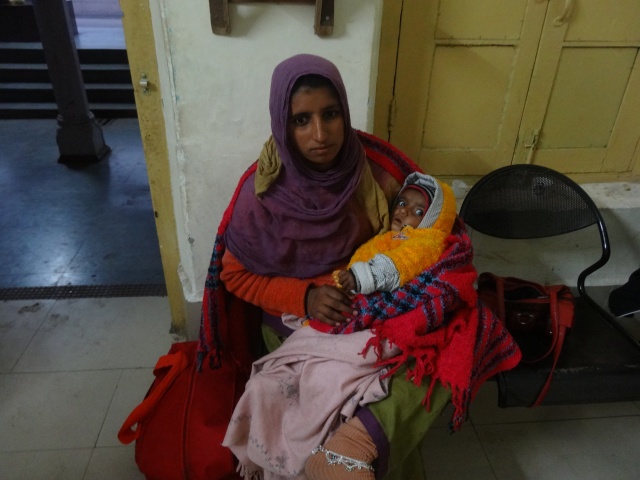 But once we were on board our train we were pleasantly surprised. The seats were comfortable and clean… and it was quiet. Not only the train itself, but the passengers! It was rather disconcerting being surrounded by people normally so vocal. Our newfound peace was occasionally shattered by the food vendors walking up and down the aisles offering water, chai tea, samosas and vegetable biryani, but apart from that it was probably the quietest time we’d shared.

There was plenty to see through the window.

People working beside the tracks… 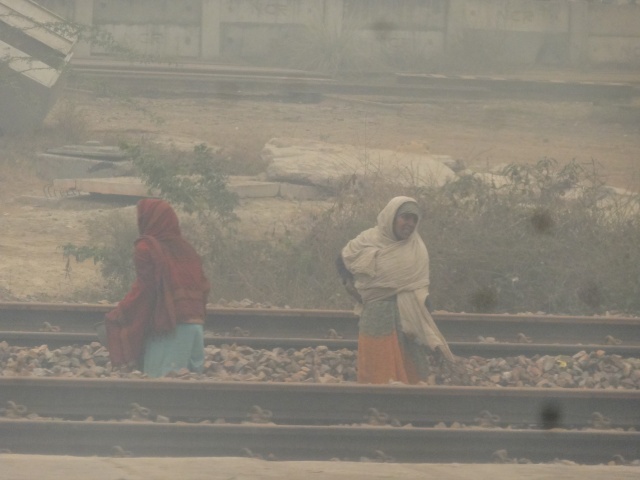 …waiting to cross the tracks…

…and of course India wouldn’t be complete without a cow staring at you through the window while stopped at some random station. 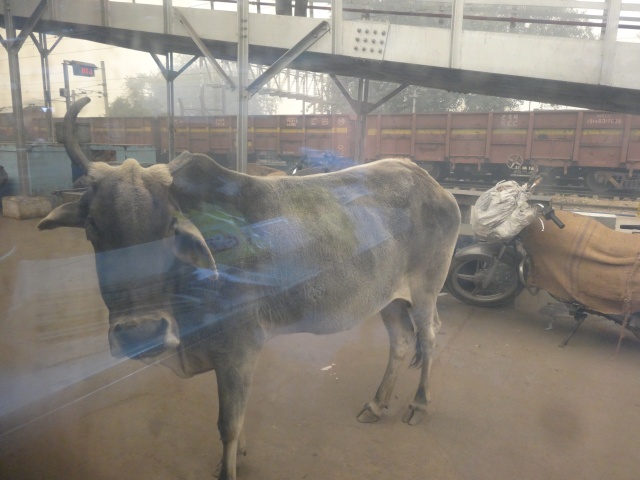 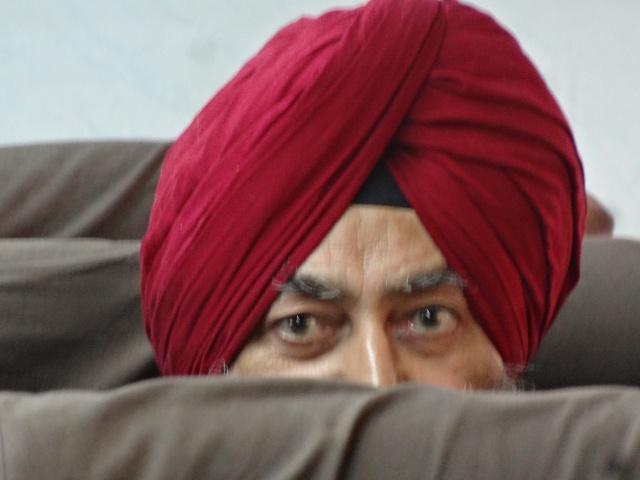 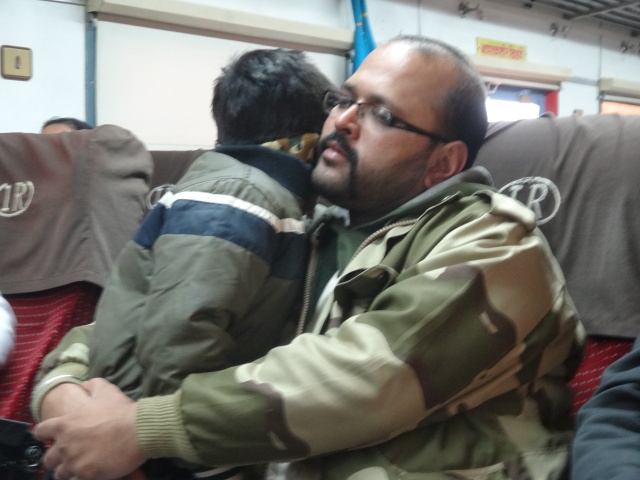 …and we were always connected.

The five and a half hour trip took eight and a half hours, not that there were any announcements en route informing us we were running late. It was a wild guess that this station we pulled into at our designated arrival time wasn’t Delhi. 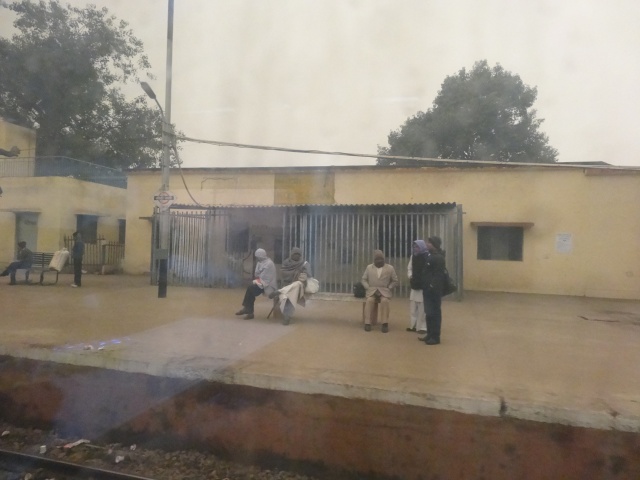 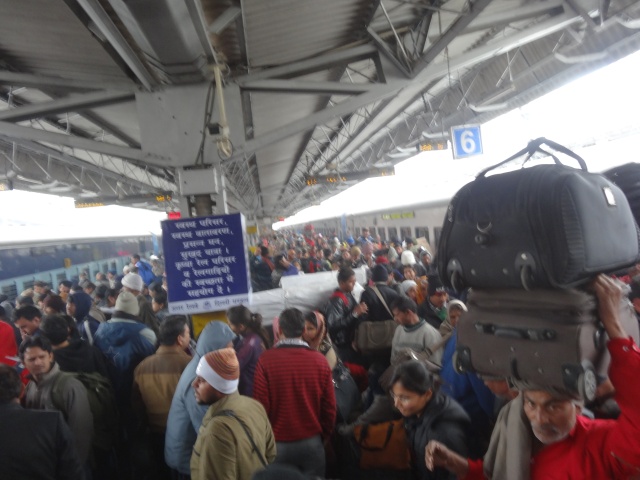 Definitely a huge WOW! moment. Nothing could have prepared me for the sheer numbers gathered at Nizamuddin, one of Delhi’s three major railway stations.

It’s being developed to ease congestion.

And we had to get up those stairs … 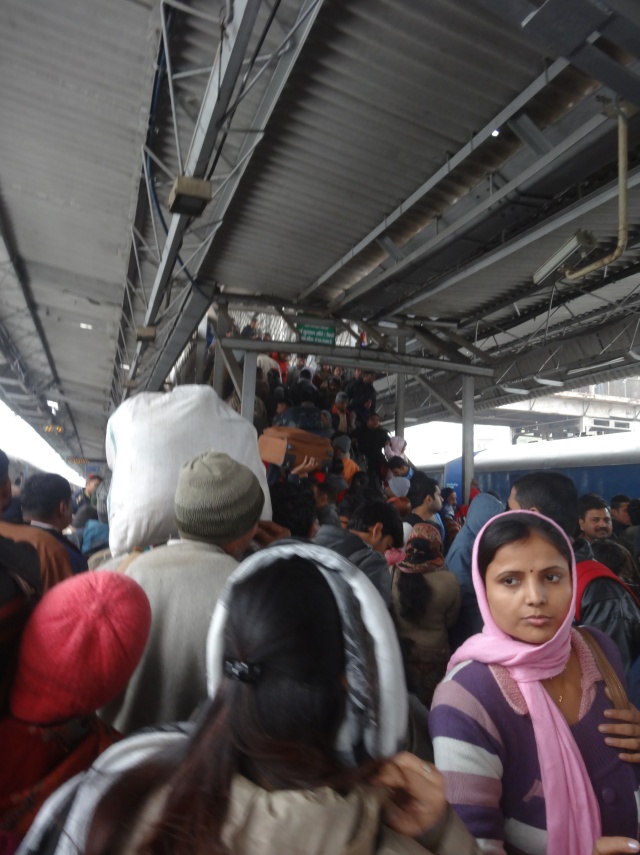 …along with everybody else.

But just getting to them was a challenge.

There were hundreds of boxes and sacks piled up, people pushing carts, pulling trolleys, carrying bags on their heads, and among all the chaos, the odd sight of a large dog sitting serenely on a pile of suitcases. Sadly, I couldn’t stop to photograph it, we had to get right in there and flow with the human tide, hoping it would sweep us along to those stairs and up.

Needless to say, the teen didn’t share my optimism. She was rooted to the spot where we had alighted at the end of the station and where there was still room to move. 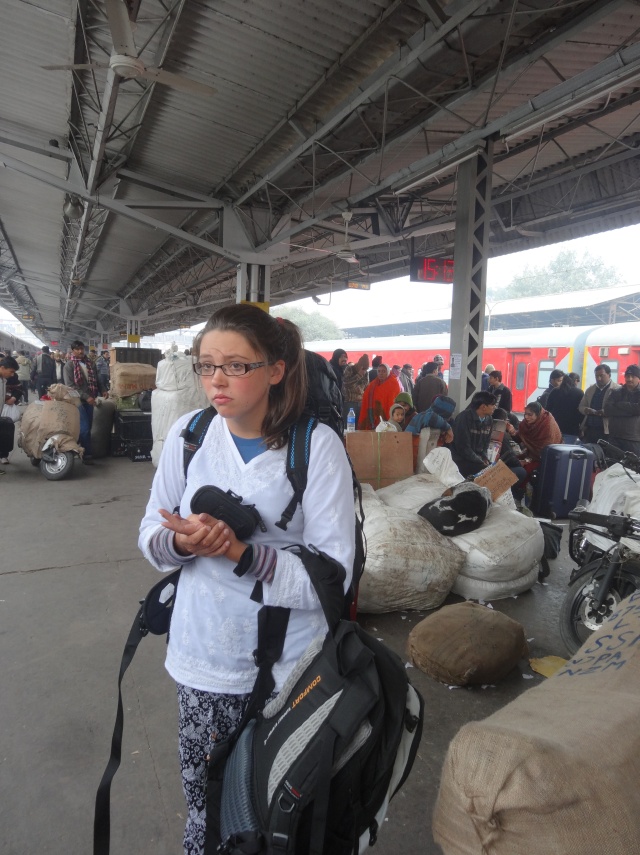 But we had no choice, so in we went.

And we got there, to the top of the stairs without incident, except when I nearly strangled a nanna when I stepped on her long scarf.

Victorious, we then had to figure out how to find our driver. We had said goodbye to our old driver Prakarsh in Ranthambhore and despite phone calls to and from this new driver we still hadn’t determined where we were meeting. Balu was very shouty with an accent as thick as syrup and I couldnt understand a word he was saying. He’d rung us twice on the train, and me, in ignorant bliss of our late schedule, kept telling him we were arriving at 12.30. Of course when I realised how late we actually were it took several calls back and forth to the hotel and the agent to determine our whereabouts and an ETA. I was told “no problem, he will wait”.

But would he? And where?

Our first problem at the top of the stairs was to decide quite simply whether to go left or right, and we had to make a decision in a hurry. Standing still, and dithering, wasn’t an option as we would just be bumped along anyway.

A kind man, alert to our obvious confusion shouted and pointed right so off we headed, interrupted by more phone calls from the incomprehensible Balu , clearly was beside himself with anxiety that he’d lost his cargo. I was forced to keep hanging up on him as I was dealing with the more immediate problem of trying to get through the crowd. I can only imagine how this would have exacerbated poor Balu’s hysteria.

Reaching the exit at the bottom of another set of stairs and a much calmer environment I tried Balu again. We both understood that the teen and I had arrived, it was just trying to describe to each other where we were.

Then an angel intervened.
This young girl approached and asked if she could be “helping me”. I gave her the phone and could hear Babalu shouting into her ear. I also noticed her family standing behind us, watching intently and as proud as punch, that their daughter was able to help the foreigners.

While we waited for Balu I discovered this young lady’s name was Chandra, she was in Year 11 and was returning to Delhi after celebrating the new year festival with her family in Rajasthan.

Our phone rang again… Balu. Another conversation with Chandra followed… 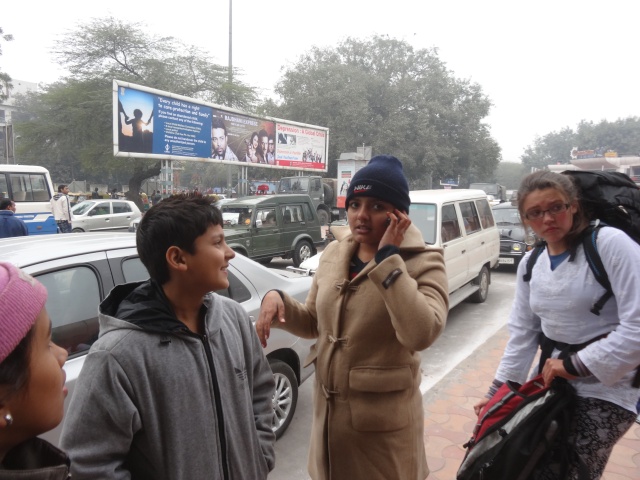 And then finally Balu arrived, running towards us flustered and frenzied with his “Miss Wendy” sign. In a tsunami of Hindi he proceeded to explain to poor Chandra everything he’d been through, before charging back to his car, with us trailing behind like naughty schoolchildren.

Inside the car we learned he’d been there since 12.15, (it was now 3.45) because “Miss Wendy you tell me you arriving at 12.30”. It was far too hard to explain that I had no clue when we would arrive, but I think he concluded that “Miss Wendy” had no clue about anything at all. Anyway, Balu was on a roll, nothing was going to stop him recounting to us every minute of his sad afternoon and he dramatically lamented the saga for the whole 40 minute trip.
Each time I thought he’d finished and there was wonderful silence, he was in fact only drawing breath to start all over again … “Miss Wendy, I wait since 12.15…”, never missing out his favourite part about how he’d missed his lunch.
I just tutted sympathetically where I could.

We were near the hotel when Balu’s brouhaha was diverted by a traffic jam of rickshaws, tuk tuks and cars all trying to negotiate the same intersection at the same time.

This vendor took the opportunity to sell us maps through the car window.

He stalked us faithfully, convinced we wanted a map of India or the world.
And because the traffic was so slow, he was there, again, when we pulled up at our hotel.

It was goodbye to Balu, and I could only imagine how his poor wife would be forced to listen to over and over again how “Miss Wendy said she’d be there at 12.30…”

This entry was posted in Uncategorized. Bookmark the permalink.

1 Response to Mumbai, menopause and madam – The train